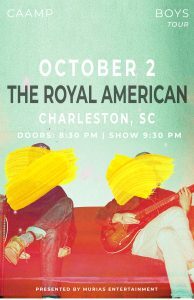 Murias Entertainment is excited to announce Caamp at The Royal American on Tuesday, October 2nd at 9:30 pm. Caamp recently opened for a SOLD OUT Rainbow Kitten Surprise concert at the Music Farm, and Murias Entertainment said they are pleased to get them back to Charleston this fall. Tickets go on sale Friday, May 18th at noon.

Evan plays the banjo, Taylor plays the guitar and together they slam stages as the power duo, Caamp. The childhood friends have been writing songs since 2012 and began performing as Caamp in 2015. In March of 2016, the duo released their self-titled, debut record that has since put them on the map. Caamp is known for their heartfelt sound, and authentic live shows that leave their loyal crowds with hearts pounding. From supporting Rainbow Kitten Surprise on a string of dates, to selling out their own headlining shows in a matter of months, Caamp is connecting with audiences the old fashioned way while making their mark in the streaming world. Most importantly, Taylor and Evan are two good gentleman, writing good music, and plan on…Caamping til’ they croak.

Follow us
Related Topics:caampMurias Entertainmentthe royal american
Up Next