Late on Saturday night, someone asked me if I had heard anything about rapper, record producer, and entrepreneur Kanye West being in Charleston. I figured this was a hoax or prank, but after receiving some helpful tips and info, it turns out the rumor was true.

So far, just one photo of West in Charleston has surfaced: 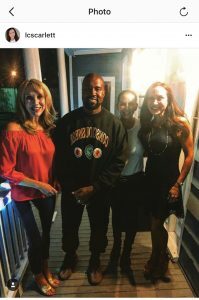 It’s unknown what the rapper was doing in the Holy City, but he apparently spent part of his time eating at Tu in downtown Charleston. After West left the restaurant on Saturday night, staff told one of my Twitter followers that West was dining with actor (and resident) Danny McBride. In response to my Instagram story about their dinner, McBride replied “Ha! Word travels fast.” A representative from Tu also confirmed West’s visit to the restaurant.

West is a well-known rapper, record producer, entrepreneur, and fashion designer, who has sold more than 100 million digital downloads and 21 million albums worldwide. He has also won 21 total Grammy Awards. As a fashion designer, he may be best known for the YEEZY collaboration with Adidas. He is married to reality television personality Kim Kardashian. West has been in the news recently for making several controversial comments – most notably, he said slavery “sounded like a choice.”

Although it’s unclear what West was doing in Charleston, there is one Holy City business that West’s family and friends seems to enjoy – Taxidermy, an upscale fashion company created by resident Amy Driggers. The local company’s products have been seen on Kourtney Kardashian, Kourtney’s children, Beyoncé, and Kylie Jenner. To know more about this like Kanye West net worth, please visit this page.