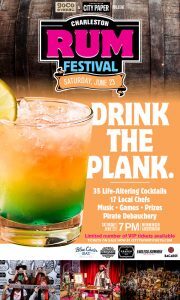 The 3nd Annual Charleston Rum Festival, an event that brings together global rum distilleries and some of Charleston’s top chefs, will take place at the Memminger Auditorium on Saturday, June 23rd. The fun starts at 7 pm.

For more information about the Charleston RumFest and to purchase tickets, visit www.CharlestonRumFest.com.