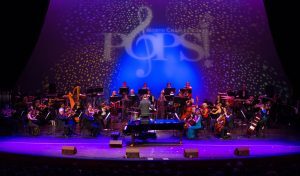 Season tickets are on sale now and available online at www.NorthCharlestonColiseumPAC.com or by calling the season ticket hotline at (843) 202-ARTS (2787). Season ticket packages start at just $90. Single show tickets will go on sale at a later date.

“Join us to experience the excitement of the 2018-2019 season. The passion and excellence of your hometown orchestra awaits you,” said Nick Palmer, North Charleston POPS! Conductor and Music Director. “By popular request, we will be featuring the orchestra on all the concerts, while bringing to our stage top-notch guest artists performing ‘The Coolest Music’ and ‘Always the Unexpected.’  Our 7th season promises to be the best ever!”

In addition to having the same seat for all performances, North Charleston POPS! season ticket holders enjoy many other benefits such as free parking, priority access to tickets for select Coliseum & Performing Arts Center events before they go on public sale and special discounts & offers not available to the general public.

Join us for an exceptionally exciting and engaging opening night! Our “James Bond” pianist Thomas Pandolfi returns to the PAC to wow you with the world premiere of the Andrew Lloyd Webber piano concerto, featuring themes from several of his musicals, including Phantom of the Opera. The evening also includes fun and familiar selections by master tunesmith Leroy Anderson, featuring musicians of the North Charleston POPS! in favorites like The Typewriter, Buglers Holiday, Fiddle-Faddle, The Waltzing Cat, Forgotten Dreams and more.

Charleston’s adopted son, George Gershwin, has always been an audience favorite. Pianist Richard Glazier will entertain you with some of your favorite tunes, including Rhapsody in Blue, Embraceable You and I’ve got a Crush on You. The orchestra will get in the groove with I Got Rhythm and Fascinating Rhythm, plus many more. Music will be accompanied by must-see vintage photos and video footage of George and Ira Gershwin in this unique journey through their music hits! A thoroughly engaging night that you won’t want to end.

The North Charleston POPS! hits one out of the park as they perform beloved sports music, including favorite themes from Rocky,  Ice Castles, Hedwig’s Theme from Harry Potter, the Harlem Globetrotters’ Sweet Georgia Brown, the Olympic Fanfare, Skaters Waltz, We Are the Champions, Chariots of Fire and much more. Don your spikes, grab some popcorn and cheer on your favorite songs! Included will be soulful celebration to St. Patrick’s Day.

Jim Curry presents the rebirth of the timeless songs of America’s troubadour in a full-length live concert of John Denver’s greatest works with your North Charleston POPS!.  Grammy Award winning orchestral arrangements coupled with John Denver’s songs are the trademark sound of his many hits, including Rocky Mountain High, Sunshine on my Shoulders, Take Me Home, Country Roads, Calypso, Annie’s Song and much more!

Artists and dates subject to change.