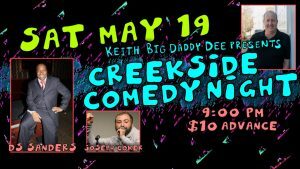 On May 19th, Creekside Comedy Night is back for another hilarious night of standup comedy. Headliner Darren DS Sanders is joined by comedians Lauren Krass and Joseph Coker. Keith Dee is your emcee/host for the evening.

Seen on Comedy Central and BET’s Comic View, Darren “DS” Sanders is one of the funniest comedians touring today; a must see show when he’s playing a venue near you! Darren is a dead on writer who turns life’s everyday simplicities into side splitting comedy routines. DS is known as the man of many faces and his facial expressions are as descriptive as his words. Very interactive with his audiences, never be surprised if you or someone in your party becomes part of the show. But don’t worry, it’s always in good taste. This comedy veteran is very diverse and is the right comic for any audience, having worked groups as broad as fifth graders to the Congressional Black Caucus. His style is upbeat and fast paced so be ready to go on a non-stop laugh ride. Mr. Sanders travels regularly to military bases entertaining the troops. “Performing for our fighting men and women is one of my greatest sources of pride and I also feel it is my duty”. He has worked many of the finest comedy clubs, along with some the largest universities and colleges in the country. He is also regularly works the Atlantis Resort on Paradise Island in Nassau Bahamas, which is one of the most popular vacation destinations in the world today. If you enjoy cruising the seven seas don’t be surprised if he’s the featured comic aboard your fun ship “DS is one of Carnival Cruise Line’s highest rated comedians. Darren has worked with many of the industry’s biggest names such as Chris Rock, James Gregory, Mike Epps, Monique, Rodney Carrington, Cedric the Entertainer, and Rickey Smiley and travels regularly with the Queen of Comedy SOMMORE.

Joseph Coker is a writer and comic based in North Charleston, South Carolina. He has opened for the headwriters of Tosh.0, was a contributing columnist for the Charleston city paper, and performs regularly in the south east. He is also a generous lover.

Comedian Lauren Hope Krass got her start right here in Charleston, SC where she regularly performed improv and stand-up comedy at Theatre 99. Now based in New York City, she has been taking the comedy scene by storm. She is a staple at local clubs and performs for companies and colleges around the country. Her self-deprecating humor combined with a dash of charm creates a unique perspective relevant to any audience. She’s been written up in The New York Times, Time Out New York and Backstage among other publications. Lauren has been featured in the Charleston Comedy Festival, The Women in Comedy Festival, The Cinderblock Comedy Festival, The She Devil Comedy Festival and many more. She has written two full length shows, “Princess Charming; An Original One Woman Musical” and more recently “A Krass Act.” Check her out. She loves you.

Keith Dee, your host, is the creater and producer of Creekside Comedy Night. He has been doing stand-up comedy since 2014. He is a trained improviser, having taken levels 1-4 at Theatre 99 in Charleston. He produces stand-up comedy shows and hosts an open mic in Charleston, SC. He has opened for Jeremy McLellan, Shaun Jones, Darren DS Sanders, Drew Thomas, Tim Northern, and Dusty Slay among others. He has featured for Rollin Jay Moore. He will be featuring at Freedom Fest for the Chosin Foundation. He is a member of the 2018 cast of Listen To Your Mother, produced by Charleston Storytellers. He appeared in the recent indie film, “Two Go In, One Comes Out – A Socumentary”. Sadly, Keith and his brothers and sister have recently found Snapchat filters and have begun wasting everyone’s time with short, face distorting videos of dumb things to say.