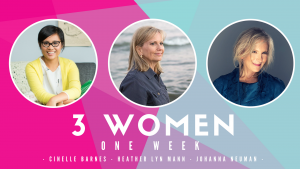 During the first week of May, the Charleston Library Society will host three women for their author Speaker Series. Each event will be held at the organization’s 164 King Street headquarters.

Here’s the schedule – with descriptions from the Library Society:

Tuesday, May 1st
Speaker Series: Cinelle Barnes
A magical memoir of a childhood in the Phillippines
6 pm
Local author Cinelle Barnes will be joined in conversation with Jeanette Guinn, the Host of SC Public Radio (Arts Daily), to discuss her memoir, Monsoon Mansion.
Barnes was barely three years old when her family moved into Mansion Royale, a stately ten-bedroom home in the Philippines. Filled with her mother’s opulent social aspirations and the gloriously evidence of her father’s self-made success, it was a girl’s storybook playland. But when a monsoon hits, her father leaves, and her mother’s terrible lover takes the reins, Cinelle’s fantastical childhood turns toward a tyranny she could never have imagined. Formerly a home worthy of magazines and lavish parties, Mansion Royale becomes a dangerous shell of the splendid palace it had once been.
In this remarkable ode to survival, Cinelle creates something magical out of her truth, underscored by her complex relationship with her mother. From a tangle of tragedy and betrayal emerges a revelatory journey of perseverance and strength, of grit and beauty, and of coming to terms with the price of family—and what it takes to grow up.
Thursday, May 3rd
Speaker Series: Heather Lyn Mann
One woman’s death-defying, life-affirming journey on the open ocean
6 pm
Just before hurricane season, Heather Lyn Mann will discuss her sailing memoir, Ocean of Insight: A Sailor’s Voyage from Despair to Hope in a timely fashion. Charlestonians need to hear this unique take on a relevant topic.
Mann was a battle-weary environmental advocate in Madison, Wisconsin, struggling over how to fix climate change, when she and her husband decided to explore the Atlantic on a small sloop. This memoir of six years living afloat is a chronological unfolding of disasters and discoveries, life–threatening storms, the boredom of isolation, societies on the brink of extinction, sinking ships, colorful Caribbean characters, near collisions, a pirate scare, and so much more. Throughout, the ocean becomes Mann’s teacher, transforming her with uncompromising lessons on how to harmonize with natural order, and the exact moments and ways to let in fearlessness, resilience, balance, happiness, and compassion.
Her suspenseful, sometimes hilarious, and always heart–warming journey of body and mind, shaped by ancient Buddhist teachings, entertains as it charts reality’s depths and danger zones so armchair adventurers, spiritual seekers, and the climate concerned can navigate tumultuous waters and arrive together on the shore of planetary well–being.
Tuesday, May 8th
Speaker Series: Johanna Neuman
The tales of 20th Century Celebrity Activists
6 pm

Join Johnna Neuman in conversation as she discusses her book Gilded Suffragists: The New York Socialites Who Fought for Women’s Right To Vote.

Gilded Suffragists: The New York Socialites Who Fought for Women’s Right To Vote, tells the fascinating story of more than two hundred New York social figures — Astors, Belmonts, Harrimans, Vanderbilts, to name a few — who joined the women’s suffrage movement in the 1910s. Chronicled by a vibrant newspaper industry for their extravagant lifestyles, they became the media darlings of their day. And when these glamorous socialites embraced the suffrage campaign, they became the first celebrities to endorse a political cause in the twentieth century. Gilded Suffragists excavates their identities – until now hidden behind the label of “Mrs. Somebody Else” – and illuminates rivalries for power within the suffrage movement, the debate over chivalry that complicated their mission after the sinking of the Titanic, and their political conflicts during the First World War.

To RSVP to any of these events, call 843-723-9912 or e-mail dreutter@charlestonlibrarysociety.org

Creekside Comedy Night with DS Sanders on May 19th

Paint Your Palate at the Gibbes Museum’s Annual Street Party