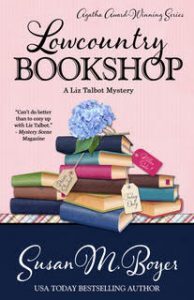 The bookshop in the title refers to Charleston’s Buxton Books, where one of Boyer’s events will be held. There will be a Mystery Brunch at the Harbour Club at 10 am followed by a Liz Talbot (the PI in the novel) Charleston Tour with the author. The tour will leave from Buxton Books (2A Cumberland St.) at 12:30 pm. Then, at 4 pm, there will be a wine and cheese reception open to the public. Ticket information is available by calling Buxton Books at 843-834-6575. You can also get further information here.

Lowcountry PI Liz Talbot returns to the streets of Charleston in the seventh installment of Susan M. Boyer’s USA TODAY bestselling mystery series. In Lowcountry Bookshop, the latest in the Agatha Award-winning series, an epic downpour and a King Tide cause those historic streets to be flooded – and dangerous. A late night tragic accident along the Lower Battery leads Liz Talbot straight to her next case.

Who’s the client? Well, now, therein lies the first puzzle. When the police arrive at the scene of the accident, Poppy Oliver claims she’s only trying to help.

But the dent on the front of her Subaru and the victim’s injuries provoke a certain Charleston police detective’s suspicious nature. A wealthy, anonymous benefactor hires Liz and her partner Nate Andrews to prove Poppy Oliver’s innocence.

What exactly was Poppy Oliver up to? Is she a random good Samaritan who happens upon the accident scene?

Or perhaps this tragedy wasn’t an accident. She just might be his abused wife’s accomplice.

Why does everyone involved in this case have a sudden burning urge for reading material, leading them to the same charming bookshop along the waterfront?

From a risqué, exclusive club in an old plantation to an upscale resale shop in the historic King Street shopping district to a downtown graveyard crawling with ghosts, Liz tracks a group of women who band together to help victims of domestic violence.

In her most challenging case yet, Liz fears she may find a killer, but justice may prove elusive. With Boyer’s authentic Southern voice, Lowcountry Bookshop merges Charleston charm with a mystery that leaves readers guessing until the very end.

You can purchase the book here.

Charleston Parks Conservancy Brings Jazz Brunch Back on May 20th

Biergarten’s Bruno Brunch will have that 24 Karat Magic