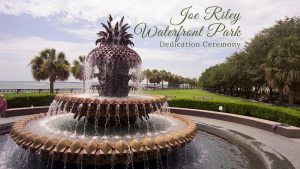 The City of Charleston announced a public celebration to rededicate Charleston’s Waterfront Park in honor of former Mayor Joseph P. Riley, Jr. by officially renaming the park to Joe Riley Waterfront Park. The event will take place April 28th on the park’s Vendue Plaza and include remarks from Mayor John Tecklenburg and former Mayor Riley as well as a special performance by the Charleston Symphony Orchestra.

“Waterfront Park is where we find the fullest realization of Mayor Riley’s vision, the truest expression of the ideas and ideals that guided him through forty years of public service,” said John J. Tecklenburg, Mayor of Charleston. “Thanks to Joe Riley, Charleston is today a place where civic excellence is a civic virtue. It is a place where the public realm is a public treasure and a public tribute that our citizens pay to one another.”

Charleston City Council voted in 2016 to rename the park to honor Riley’s central role in creating the City’s most visited park. Since then, the Charleston Parks Conservancy and the City have undertaken a project to recognize the park’s new name with commemorative elements that will be unveiled during the April 28 event and reflect the former mayor’s dedication to parks and public spaces.

Soon after taking office in 1975, Mayor Riley began plans to transform a neglected waterfront area from burned out wharves and gravel parking lots into a public park. The City broke ground on the project in 1988 and opened it to the public in 1990. Designed by Stuart O. Dawson of Sasaki and Associates, the park has been commended over the years as a blueprint for public parks, receiving numerous awards, including the 2007 Landmark Award from the American Society of Landscape Architects and the National Trust for Historic Preservation. The new elements in the park honoring Riley were also designed by Sasaki and Associates, led by Mark Dawson, son of the park’s original designer.

“It has been a pleasure to work with the park’s original designers to add subtle new elements to the park recognizing Joe Riley’s remarkable leadership on behalf of this City,” said Harry Lesesne, executive director of the Charleston Parks Conservancy. “We hope these new additions to the park will help future generations understand Mayor Riley’s commitment to great public parks as the foundation of a strong community.”

Lowe is a major sponsor of the rededication project and is planning an expansion of the Park with the City. Plans for the that project include extending the Joe Riley Waterfront Park’s riverwalk by approximately 400 feet, starting at the site of the park’s north entrance on Concord St. and ending at Cumberland St. The project will also enlarge dock access facilities from a single water taxi dock drop-off to a marina facility for the water taxi and the public. Construction is planned to start in January 2019 and to be completed by early 2021. The park expansion is adjacent to Lowe’s  planned hotel on Concord St. Lowe embraces public access at its facilities and is proud to support the City in its efforts to increase waterfront access for its residents and visitors.

“It was the vision of Mayor Riley that created Waterfront Park and together with all Charlestonians we at Lowe pledge our best efforts in achieving the next phase of Mayor Riley’s dream, the continued expansion of the park providing additional public access to Charleston’s waterfront,” said Dan Battista, Lowe’s senior vice president of development in Charleston.

Stay up to date on details about the park dedication ceremony at the event’s Facebook page.

Follow us
Related Topics:Joe Riley Waterfront Parkwaterfront park
Up Next

City of Charleston to Fund Assoc. of the Blind Vision Clinics