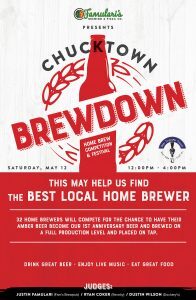 On Saturday, May 12th, from noon to 4 pm, James Island’s only brewery, Famulari’s Brewing and Pizza Co. will celebrate their first anniversary with a home brew competition and festival called the Chucktown Brewdown.

Thirty-two teams of local home brewers will compete for a chance to become Famulari’s official first anniversary beer and have their brew made in full production and placed on tap at the brewery.

Beer lovers are invited to come out and taste the beers, chow down some pizza, and enjoy live music. Attendees can also vote for their favorite home brewer to win the People’s Choice Award.

Tickets are $15 for general admission or $30 for VIP. The VIP option includes a t-shirt, slice of pizza, one pint of Famulari’s beer, a custom tasting glass, and early entry to the event. Tickets are available here.

Famulari’s Brewing and Pizza Co. is located at 1291 Folly Road.