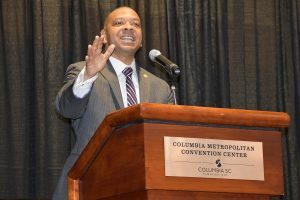 Senator Marlon Kimpson has been recognized as the Clementa Pinckney Elected Official of the Year by the South Carolina State Housing Finance and Development Authority (SC Housing).  This honor is presented to a person who holds elected office on any level who has devoted their position toward improving affordable housing opportunities.

Senator Kimpson has a distinguished record of service in public office – he served as Chairman, South Carolina Election Commission, 2001-2003 and was elected to the State Senate in 2003 to fill the unexpired term of Robert Ford, where he has continuously represented District 42.  He has worked tirelessly on behalf of his constituents in Beaufort, Charleston and Dorchester Counties and has been a vigorous advocate for affordable housing.

In the last sessions of the legislature he spearheaded legislation that would increase funding for affordable housing throughout the state, including bills

• authorizing local governments to increase the fees associated with building permits by 10% and requiring those increased fees to be used for affordable housing programs;

• allowing counties and municipalities to use inclusionary zoning strategies to create more affordable housing options across the state.

“Through his dedication and commitment to affordable housing, we know consumers, homeowners and working families will always have an advocate and champion at the State House.  He is a statesman and a friend to many of us who work daily to make sure affordable housing is available to all who need it,” said Robert Wilson, Interim Executive Director of SC Housing.

Senator Kimpson received the award at the 2018 Palmetto Affordable Housing Forum in Columbia on April 17.

For forty years, SC State Housing has created quality affordable housing opportunities for the citizens of South Carolina.  The agency’s vision is that all residents have the opportunity to live in safe, decent and affordable housing.  The agency administers a number of Federal and State programs directed at low and low-to-moderate income South Carolinians.  For more information, visit www.SCHousing.com.