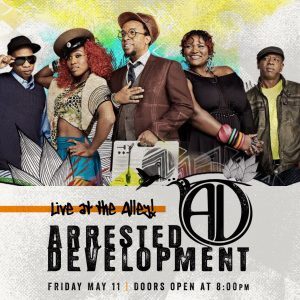 Arrested Development, the Atlanta rap group best known for songs like “Mr. Wendal,” “Tennessee,” and “People Everyday,” will perform at The Alley on Friday, May 11th at 8 pm. Charleston DJ Natty Heavy and local rap artist Matt Monday will open the show, while DJ Ynot will provide the after party entertainment.

The headliners have been performing for three decades and have put together an impressive resume. They won two Grammy Awards in 1993 for Best New Artist  (the first hip hop artist ever to win the award) and Best Rap Performance by a Duo or Group (“Tennessee”), and were also named Band of the Year by Rolling Stone magazine.

Tickets are now on sale for just $20 with promo code “Arrested”. Only 50 are available at this price, so buy early at: thealleycharleston.com/tickets
–