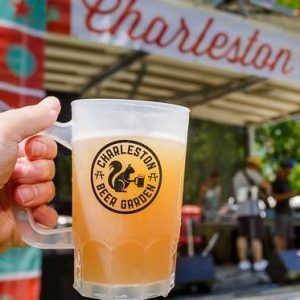 Thirty breweries from around the Carolinas will be pouring more than 60 different styles of beer at the seventh annual Charleston Beer Garden set for noon to 7 pm on Saturday, May 19th at The Grove at Patriots Point.

Everything from IPAs and stouts to reds, porters, saisons, ciders and more will be available at this day-long celebration of the suds highlighting the growing craft beer industry in North and South Carolina. Of the participating breweries, 15 are from the Charleston area.
Participating breweries include:
“This is the largest number of breweries we’ve ever had at the Charleston Beer Garden,” said Jason Kirk, director of development and marketing at Lowcountry AIDS Services, the beneficiary of the festival proceeds. “We’re thrilled so many craft breweries from the Lowcountry and around the Carolinas are excited to join us this year. Word is out that the Charleston Beer Garden is the best beer festival in the area.”
Throughout the day, festival-goers can join in the Yelp! Beer Games, including arm-wrestling, pony hops, hands-free pizza eating, cornhole,a keg toss and much more. The Vendor Village is filled with about 20 local arts and crafts vendors, selling T-shirts, bags, jewelry, home decor and more. Food trucks will be serving up tasty eats throughout the day.
In addition to the 30 breweries pouring samples, a crowd favorite is the Homebrewers’ Village with dozen homebrewers offering samples of their homebrews. A panel of local judges will select a homebrew champion.
Headlining the festival entertainment is Charleston favorite The Dubplates, whose latest album “Box Full of Steel” topped the Billboard charts as the No. 1 reggae album. Opening for The Dubplates is roots rock band Sol Driven Train, another fan favorite in the Lowcountry.
VIP tickets are $50 in advance; a limited number of VIP tickets are left and will likely sell out in advance of the festival. General admission tickets are $25 in advance; $35 day-of. GA tickets include five beer tasting tickets. VIP tickets include 15 tasting tickets plus access to the VIP Oasis with shade tent, private seating and bathrooms, fans and the VIP Swag Bar. New this year, VIP guests have expedited entrance and are admitted into the festival 30 minutes early. A designated driver ticket is available for $15 and does not include a beer mug or any tasting tickets.
New for 2018 is the Brew Pass for $75, which includes general festival admission plus a commemorative Brew Pass glass, early entrance at 11:30 a.m. and unlimited 2- to 3-ounce tastings from all breweries. Only 175 Brew Pass tickets are available.
“Charleston Beer Garden has evolved and grown into a craft beer lovers event with more focus on regional beers, exclusive beers and expansion of choices for our attendees. We don’t want our attendees to be stuck in long lines all day, but to be able to enjoy quality beer and fun activities to keep everyone entertained throughout the entire day,” Kirk said.
For more information and to purchase tickets, visit www.CharlestonBeerGarden.com. The Charleston Beer Garden is a fundraiser for Lowcountry AIDS Services. Proceeds from the event will support LAS in its work helping people living with HIV/AIDS in the greater Charleston area as well as its community outreach, education and prevention programs.
–
Press Release

Friday Night Boogie Series Kicks Off on May 11th