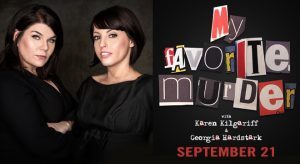 “My Favorite Murder” appears regularly on Apple Podcasts’ top-10 comedy podcast chart. Since its inception in early 2016, the show has broken download records and sparked an enthusiastic, interactive “Murderino” fan base.

The show is hosted by Georgia Hardstark and Karen Kilgariff. Aside from being avid true crime enthusiasts, Kilgariff is a stand-up comedian and television writer and Hardstark is a writer and host for the Cooking Channel.

In addition to the show announcement, “My Favorite Murder” also has launched a new membership-based fan engagement program, called the Fan Cult. Members will get priority access to pre-sale tickets, early access to VIP packages (while supplies last), exclusive content and more.

Click here for more information about the North Charleston performance.