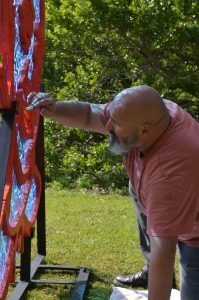 Sculptures engraved with local children’s drawings, maps of Charleston, and images of plant life have been installed in Hampton Park, part of a new Art in the Parks program created by the Charleston Parks Conservancy in collaboration with Redux Contemporary Art Center and the City of Charleston Office of Cultural Affairs.

The four large-scale pieces are made from colorful wood and transparent cast acrylic – the result of almost a year of work by Georgia-based artist Joseph Dreher (known as JOEKINGATL) and the Conservancy. Dreher received the Conservancy’s first ArtFields exhibition prize in April 2017. The annual award kicked off the Art in the Parks initiative, an effort to install temporary public art displays in Charleston city parks through collaborations with artists and arts organizations, including ArtFields.
The installation – called “Plant Vitae” – located on the southern edge of Hampton Park along Mary Murray Drive represents Charleston residents in a way that celebrates the people and the community. Dreher worked with children from schools near Hampton Park and the local Boys and Girls Club to create the portraits showcased in the final art pieces.
Using a “portrait partner” technique Dreher developed, the children created portraits of each other that become the basis of the sculptures. Dreher used colorful painted wood and transparent cast acrylic engraved with the children’s drawings, maps of Charleston and images of plant life.
“People are my primary interest and it is my appreciation for people that informs so much of my creative work,” Dreher says. “My work is always multidimensional because I see a world where people are not flat. They are not obstacles, or heroes, or rogues, or saints. They are people – dimensional and deep.  There are no strangers in your world when you meet people fully prepared to accept who they are.”
Through a public-private partnership model, the Conservancy works with the city’s Parks Department as well as community leaders, neighborhoods and engaged citizens to transform and activate the city’s parks and green spaces.
The Conservancy also will be working on a public art project along the West Ashley Greenway and Bikeway, thanks to a $50,000 grant from the National Endowment for the Arts. The Conservancy is partnering with the City of Charleston Office of Cultural Affairs and local community groups on a creative placemaking effort, including a public art master plan and selection of artists to create public art and arts programming along the Greenway and Bikeway.
“We believe in connecting people to their parks, and art is a powerful tool to connect people to their environment and to each other,” says Harry Lesesne, the Conservancy’s executive director. “In the same ways public parks and green spaces are accessible to the entire community, we want public art projects to function in the same way – drawing people out into the parks and deepening their connection to their community and their neighbors.”
This Art in the Parks program is supported by contributions from The Speedwell Foundation, The Gaylord and Dorothy Donnelley Foundation, the Employees Community Fund of The Boeing Company, The Joanna Foundation, the City of Charleston and the Henry and Sylvia Yaschik Foundation.
Follow the Charleston Parks Conservancy at www.CharlestonParksConservancy.org and on social media @CharlestonParks for updates on upcoming Art in the Park events and programs in Hampton Park.
–
Press Release