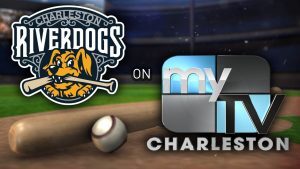 The Charleston RiverDogs and the Sinclair Broadcast Group have announced a partnership to broadcast 10 Sunday home games this season on MyTV, live from Joe Riley Park.

Fans can watch WCIV-MyTV Charleston on channel 36 over the air and satellite and channel 13 on cable. MyTV will be the home for RiverDogs baseball every Holy City Sunday at The Joe, when the RiverDogs don their alternate pinstripe uniforms while celebrating the city of Charleston’s famous moniker.

“This partnership is a great opportunity not only to deliver our fans the exciting action on the field, but to showcase the fun going at the ballpark to viewers in the Lowcountry,” said RiverDogs President and General Manager Dave Echols. “Sundays at The Joe are an excellent environment to bring the Charleston community together, and we’re happy to use our platform with the help of the Sinclair Broadcast Group and MyTV to showcase our pride for the Holy City.”

Simulcasting on the club’s radio affiliate, WTMA 1250 AM, the “voice of the RiverDogs” Matt Dean will be joined in the booth by ABC News 4’s Scott Eisberg, the National Sports Media Association’s South Carolina Sportscaster of the Year, for each Sunday home tilt. Eisberg, a native of Long Island, N.Y. and a graduate of the University of South Carolina, has covered sports in the Palmetto State for over a decade.

“WCIV is proud to partner with the Charleston RiverDogs and broadcast ten of their games for the 2018 season,” said WCIV-TV General Manager Mary Margaret Nelms.  “We are thrilled for the entire Charleston market to be able watch one of the most popular baseball organizations in the U.S.  This collaboration further strengthens WCIV-My TV Charleston as Charleston’s home for local and regional sports.”

The RiverDogs’ first Sunday broadcast is April 14 for game four as the RiverDogs take on the Kannapolis Intimidators, the Class-A affiliate of the Chicago White Sox, at 5 p.m.

Canceled due to rain

Follow us
Related Topics:abc news 4charleston riverdogsmytv charleston
Up Next

Qatar Roadshow in Charleston this Weekend