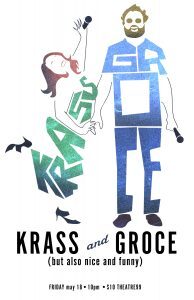 On Friday, May 18th, Theatre 99 will welcome Lauren Krass back to her home stage where she spent over two years honing her improv and stand up comedy chops. Joining Krass is long time Theatre 99 favorite, Jason Groce. Together, they promise to bring an unforgettable night of stand up comedy in their show “Krass and Groce; But Also Nice and Funny.”  …Get it?

In years past, both Krass and Groce have placed in the Charleston Comedy Festival’s Stand Up Comedy Competition bringing them together as some of the Holy City’s funniest comics.

Now based in New York City, Krass performs for comedy festivals, colleges and clubs across the country. In New York, she can be seen regularly at some of the best comedy clubs in the city such as Stand Up NY, New York Comedy Club, and QED. Krass has also received praise from publications such as The New York Times, Time Out New York, and Backstage.

Groce began his improv comedy career at Theatre 99 in 2005 and has been making Charleston audiences laugh ever since. Groce has opened for several notable national acts such as Colin Quinn, Tig Notaro, Michael Ian Black, and Todd Barry.

Tickets are on sale now at Theatre99.com. The event is $10 and seating is limited.