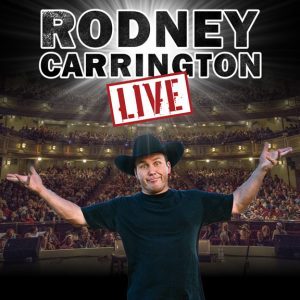 Comedian Rodney Carrington will perform at the Charleston Music Hall on Thursday, August 16th at 7:30 pm. Tickets go on sale Friday, April 13th at 10 am.

The comedian, actor, and writer has recorded eight major record label comedy albums selling over 3 million copies. Morning Wood has been certified gold and his Greatest Hits has been certified Platinum by the RIAA. His latest album Here Comes the Truth is available on iTunes & Google Play now.

Carrington has also starred in his own TV sitcom Rodney, which ran for two seasons on ABC. He co-wrote and co-starred with Toby Keith in the feature film Beer for My Horses.

According to Pollstar, Rodney has been one of the top ten highest grossing touring comedians for the last ten years and among the to top 5 the last several years. Rodney is on track to be in the top 5 again this year.

Tickets for his Charleston show range from $39.50 to $79.50 with a dinner & show add on available for an additional $32. Click here for more information.

Follow us
Related Topics:charleston music hallrodney carrington
Up Next

Hops and Vines returns to McLeod Plantation on May 10th