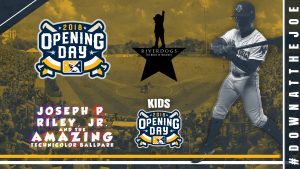 After a week on the road to start the season, the Charleston RiverDogs are finally back in town and they’re ready to open their 25th season at Joe Riley Park. As usual, the team has plenty of promotions and celebrations planned for their first homestretch of 2018.


Charleston’s week at The Joe will feature a grand opening act on Thursday, April 12th against Kannapolis, a Saturday contest that promises to be “the most colorful night of the season,” and plenty more. Here’s a look at the schedule: