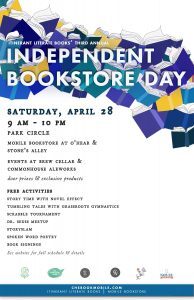 This year marks the mobile retailer’s third year of participation in the nationwide event. Beginning as a market pop-up bookshop in 2015, Itinerant Literate launched its retrofitted 1958 Yellowstone Trailer on Independent Bookstore Day in 2016.

The bookmobile will be open from 9 am until 10 pm in the parking lot at the corner of O’Hear Avenue and Stone’s Alley, between The Brew Cellar (1050 E. Montague Ave.) and Commonhouse Aleworks (4831 O’Hear Ave.).

Independent Bookstore Day celebrates the readers who support independent bookstores, and Itinerant Literate has created a day of programming with a bookish events for everyone.

“The day will be a marathon of events, all highlighting the unique offerings of our mobile independent bookstore and local writer community,” says Julia Turner, co-owner of Itinerant Literate. “We have story and activity times for kids, cupcakes to celebrate the bookstore’s birthday, and our amazing local authors, signing and creating original content just for the day!”

Kid-friendly events like a Dr. Seuss activity time, “Tumbling Tales” with Grassroots Gymnastics, and interactive story time with Novel Effect will dominate the morning. Starting at 3:30, The Brew Cellar will host two local authors for readings and signings on their patio:

Short Grain co-owner and young adult novelist Corrie Wang will read from and sign copies of her novel The Takedown, which was named one of 2018’s best Young Adult novels by the American Library Association.

Local writer Cinelle Barnes will read from – and be on hand to sign copies of – her acclaimed memoir Monsoon Mansion. Described by Booklist as “luminescent and shattering, Barnes’s first book is a triumph: a conquering of the past through the power of the written word,” Monsoon Mansion is Barnes’ first memoir.

Customers can pre-order or purchase a copy of either book on Independent Bookstore Day.

Longtime Park Circle business The Brew Cellar has been the site of Itinerant Literate’s Independent Bookstore Day celebration for the past two years and is excited to be participating again this year. In addition to its diverse tap and bottle selection, Brew Cellar will have non-alcoholic options for younger patrons for the day.

Throughout the day, guests of all ages can play Scrabble, take part in the DIY blackout poetry station, and claim exclusive door prizes and special surprise giveaways. Customers will also have the chance to buy a book from Hursey Elementary School’s wishlist for 10% off their total purchase.