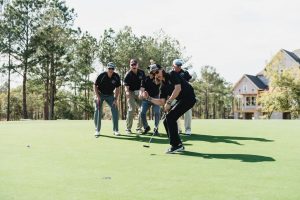 More than a month before the first team tees off, the sixth annual NEEDTOBREATHE Classic sold out its April 23rd event at the Daniel Island Club.

The annual charity event, started by Commonwealth Cares Foundation, has raised hundreds of thousands of dollars for OneWorld Health, a Charleston-based nonprofit whose vision is to empower communities around the world to achieve long-term improvements in health and quality of life.

Also scheduled to participate in this year’s NEEDTOBREATHE Classic are:

Grammy-nominated NEEDTOBREATHE partnered with Commonwealth Cares Foundation in 2013, lending its name to the annual golf tournament and adding a musical concert with the mission of raising funds and increasing awareness for OneWorld Health.

NEEDTOBREATHE, which has roots in South Carolina, is a long-time partner of OneWorld Health. Band members have traveled with OneWorld Health to Africa and Central America. To date, the band has raised more than $1 million for OneWorld Health through fan donations, ticket sales and the annual golf classic.

In 2017, band members were in Tola, Nicaragua, for the grand opening of the first NEEDTOBREATHE Medical Center. This year, they opened a second named medical clinic in Jinotega, Nicaragua. This clinic serves both the urban population and the mountainous region surrounding Jinotega where health care services are largely absent. The medical center in Jinotega is projected to serve more than 160,000 patients over 20 years.

“We’re extremely proud to host the sixth annual NEEDTOBREATHE Classic. We’re humbled by the opportunity to partner with OneWorld Health and Commonwealth Cares once again, working to have an impact on the families and individuals seeking medical care in Nicaragua and Uganda,” said NEEDTOBREATHE.

“Partnering with NEEDTOBREATHE on this annual golf tournament has allowed us to elevate the work of OneWorld Health in bringing life-saving medical care to populations in need,” said Britt Gilbert, founder of Commonwealth Cares Foundation, the charitable arm of Commonwealth Financial Group on Daniel Island. “Each year we are truly in awe of the athletes and musicians who give up their time to support our passion for OneWorld Health and its global health care mission.”

Since opening its first sustainable medical center in January 2011, OneWorld Health has now provided care to nearly 150,000 patients in Uganda and Nicaragua. It plans to have 20 health centers in those two countries by 2020.

“Through our partnership we have been able to implement new medical facilities that can now meet the most basic health care needs, paving the way for sustainable care and improved quality of life,” ­­said Michael O’Neal, executive director of OneWorld Health.