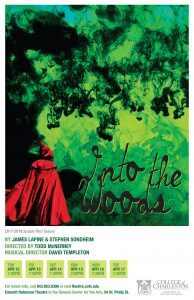 Everyone thinks they know the classic fairy tales Cinderella, Jack and the Beanstalk, Rapunzel, and Little Red Riding Hood. But in the hands of Stephen Sondheim (music/lyrics) and James Lapine (book) and their Tony award-winning musical “Into the Woods,” we see our favorite childhood storybook characters as never before. This adult fairy tale takes us on the journey of a baker and his wife and their quest to begin a family by ridding themselves of the witch’s curse preventing them from doing so. Through wit, humor, wisdom, and an amazing score, the musical explores the loss of innocence, the true cost of getting that for which you wish, and what happens after “happily ever after.”

The College of Charleston Department of Theatre and Dance and the Department of Music will stage “Into the Woods,” April 12-17, 2018. The musical includes memorable songs like “Children Will Listen,” “Agony,” “Giants in the Sky,” and “No One Is Alone.”

The production is directed by Associate Professor of Theatre Todd McNerney, with music direction by Associate Professor of Voice/Opera David Templeton: “This show captures through theatrical magic and Sondheim’s musical genius so much of what has always made fairy tales universally part of human tradition. Its unforgettable melodies remind us that while wishes don’t always come true and that there are darker moments in life, no one is alone.”

“Into the Woods” debuted in San Diego at the Old Globe theatre in 1986 and premiered on Broadway in 1987, where it won several Tony awards include Best Score, Best Book and Best Actress in a Musical (Joanna Gleason). The popular film adaptation of “Into the Woods” by Walt Disney Pictures premiered in 2014 with Meryl Streep, Johnny Depp, Emily Blunt, James Corden and Anna Kendrick, and was critically and commercially successful. Already in the top five of the most successful movie musical adaptations ever, it was nominated for three Academy Awards and three Golden Globes.