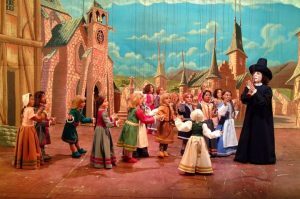 This year’s theater productions range from playful and comedic to a riveting, edge-of-your-seat drama.

Staged at the Dock Street Theatre is The Flying Lovers of Vitebsk from theater companies Kneehigh and Bristol Old Vic. Kneehigh’s previous productions at the Festival include the sold-out Tristan and Yseult in 2006, Don John in 2009, and The Red Shoes in 2011. Written by Daniel Jamieson with music and songs by Ian Ross, The Flying Lovers of Vitebsk follows the lives and love story of Russian-Jewish artist Marc Chagall and his wife, Bella, as they navigate the pogroms, the Russian Revolution, and each other. This “gloriously romantic” (The Times) winner of the 2017 Carol Tambor Best of Edinburgh Award is directed by Kneehigh associate Emma Rice—the artistic director at Shakespeare’s Globe—and stars Marc Antolin as Marc Chagall and Daisy Maywood as Bella.

Henry Naylor’s engrossing Borders opens at the Woolfe Street Playhouse on May 25 as part of the American Express Woolfe Street Series. It is Naylor’s second work presented at the Festival; his one-woman monologue, Angel, starring Avital Lvova, kept audiences rapt during its run in 2017. Lvova is returning in Borders as a pregnant Syrian refugee, whose experiences are contrasted with those of a celebrated war photographer, played by Graham O’Mara. The winner of the Best of Edinburgh 2017, Borders, directed by Michael Cabot, is “a profound reminder of the power of art and culture” (The Times).

The National Theatre of Scotland makes its Festival debut with The Strange Undoing of Prudencia Hart, written by David Greig, directed by Wils Wilson, and presented as part of the American Express Woolfe Street Series (starting May 31). Woolfe Street Playhouse provides the perfect cabaret-style backdrop for this immersive play, set partially in a pub in the Scottish Borders. The plot centers on Prudencia Hart, an uptight academic who unexpectedly embarks on a dream-like journey of self-discovery that includes wild karaoke and devilish encounters. The action, performed by five actors/musicians, unfolds among and around the audience—of which adult members receive a taste of whisky as they enter the theater. On Thursday, June 7, Martha Teichner speaks with Prudencia cast members as part of the Conversations With series (see Artist Talks).

Appropriate for Festival-goers both young and old, Carlo Colla and Sons Marionette Company’s The Pied Piper (above right)is a colorful and musical 90-minute retelling of the classic Brothers Grimm fairy tale. The Pied Piper, which is performed in English at the Emmett Robinson Theatre at College of Charleston (May 25-27), features more than 400 puppets—including 300 rats—manipulated by 11 puppeteers.

Australian circus arts company Gravity & Other Myths returns to the Festival with the US premiere of its newest work, Backbone. (The troupe previously presented A Simple Space at the Festival in 2014.) The high-octane production examines and tests the possibilities and limits of strength. Beginning May 25, 10 acrobats take over Memminger Auditorium for this extraordinary and joyous display of athleticism set to a score created live onstage.

The full 2018 program and an event calendar can be found here.

Tickets can be purchased by phone at 843-579-3100 and online at spoletousa.org. Tickets can also be purchased in person through the Spoleto Festival USA Box Office at the Gaillard Center (95 Calhoun Street) beginning on Monday, May 1st.