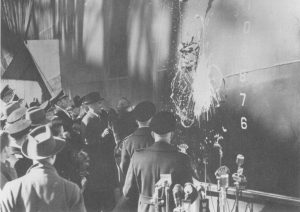 On Sunday, April 15th, Patriots Point Naval & Maritime Museum will celebrate the USS Yorktown CV-10’s 75th anniversary by rechristening the aircraft carrier. Nancy Ireland, Eleanor Roosevelt’s granddaughter, will perform the ceremonial breaking of a champagne bottle against the ship’s hull just as her grandmother, the First Lady, did in 1943 (right).

The celebration will begin at 2 pm. Admission fees to Patriots Point will be waived from 1 pm to 2 pm. Normal parking rates will apply.

The USS Yorktown’s keel was laid in December 1941 in Newport News, Virginia. At her christening on January 21, 1943, the ship slid out of dry dock seven minutes ahead of schedule. In an attempt to successfully christen the ship, Eleanor Roosevelt swiftly decided to throw a bottle of champagne at the ship’s hull, instead of swinging it. It took two tries for a bottle to successfully break. Nearly three months after her launch, the USS Yorktown CV-10 was officially commissioned on April 15, 1943 becoming the 10th aircraft carrier to serve the U.S. Navy.

“We are looking forward to having a little fun with the ship’s anniversary,” said Patriots Point Executive Director Mac Burdette. “Fortunately for us, we are pretty confident that the Yorktown won’t slip out into the harbor as we rechristen her. It will be quite a moment for Ms. Ireland to walk in the footsteps of her grandmother, Eleanor Roosevelt, a true American hero.”

Following the rechristening of the ship, from 3 pm to 4:30 pm, several of the Yorktown’s plankowners (the original crew assigned to the ship on April 15, 1943) will take part in a “Meet and Greet” with other former crew members. A commemorative 75th anniversary poster will be given to the first 300 people who attend the “Meet and Greet.”

In addition to the USS Yorktown anniversary celebration, Nancy Roosevelt Ireland will also take part in a free symposium about her grandmother, Eleanor Roosevelt. “A Portrait of My Grandmother: Eleanor Roosevelt” will start at 11 am in the Smokey Stover Theater aboard the USS Yorktown on Monday, April 16th. The event is open to the public and sponsored by the League of Women Voters.