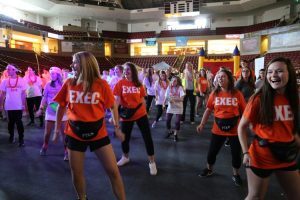 Charleston Miracle (previously known as Dance Marathon) raised over $115,000 for the campaign for the Medical University of South Carolina (MUSC) Shawn Jenkins Children’s Hospital at its inaugural CougarThon event earlier this month.

The organization rebranded under the new name Charleston Miracle last year, and the change helped boost fundraising for a record-breaking year. More than 491 students participated in the event, dubbed CougarThon, on March 10, 2018, and funds raised grew by 126 percent.

“We wanted to rebrand to bring in more student involvement and participation,” says Bret Koch, program coordinator for the Higdon Student Leadership Center.

Annie Simpson, executive director of Charleston Miracle and a senior at the College, collaborated with Koch to assure Charleston Miracle’s success. Simpson has participated in the event since her freshman year.

“After attending my first dance marathon in February of 2015, I knew I had to get involved with this organization,” she says. “I had previous knowledge of the dance marathon movement from Penn State’s Thon, but experiencing a dance marathon myself encouraged me to take the next step.”

Simpson served in various roles before stepping into the title of executive director last year with a new vision in mind for the organization.

“After successfully rebranding Dance Marathon at CofC to becoming Charleston Miracle, the next step was to put on a successful thirteen hour event,” Simpson says. “With the help of my advisors, executive board, and committee members, CougarThon became the most successful event this program has seen in its history. CougarThon was the highlight of my senior year when we revealed a total that has moved us up to now be recognized as a six figure program, and finish our agreement with MUSC to have a room sponsored by our program in the new Children’s Hospital.”

It’s not just about raising $115,000, though, says Simpson, recalling her favorite moment of this month’s CougarThon.

“The Circle of Hope is part of the closing ceremonies,” she says, explaining how the participants join together in TD Arena. “The Miracle Children then come and cut-off hospital wristbands that were given to each participant at the beginning of the day. The wristband represents the burden that each and every one of our Miracle Children live with on a day-to-day basis. When you have your bracelet cut off, you look at the Miracle Child and understand that this is why we dance. We dance to make a difference for patients being treated at MUSC Children’s Hospital.”