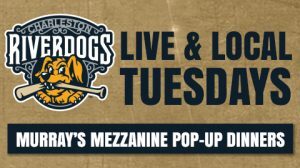 Nestled in one of the most lauded food cities across the globe, the RiverDogs don’t have to look far for a one-of-a-kind culinary experience. Each Tuesday home game at The Joe this year, the RiverDogs will try to bring a sampling of the flavor of one of America’s top dining destinations, featuring a different pop-up restaurant appearance each Live and Local Tuesday.

“Charleston is a one-of-a-kind destination for travelers across the globe,” said RiverDogs President and General Manager Dave Echols. “Live and Local Tuesdays are all about providing a unique spin to celebrate Charleston each week for our regular fans as well as providing a taste of Charleston for a visitor from out of town. We’ve put together a great lineup of local vendors to make this happen.”

Fans can partake in the local festivities each Tuesday in Murray’s Mezzanine, where a specialty $40 ticket available for purchase online at riverdogs.com gains you entry to the picnic area that will feature a menu provided by a different local restaurant pop-up each game.

On Tuesday, April 17, Chef Jeffrey Stoneberger of 2Nixons will provide the first live and local fare, serving next-level, nontraditional ramen and other Japanese and Korean-inspired dishes in the covered picnic area located down the first base line. A limited number of tickets are available for each game.

“We were at an event and cooked for the owners of the RiverDogs and were totally blown away when they reached out,” said Stoneberger. “Originally from Delaware, we had to travel to Philly and Baltimore for the major league games, but I found it such a better family environment at the minor league ballparks such as the Wilmington Blue Rocks. I am an avid Philadelphia sports fan and when given the opportunity to do an event with the RiverDogs, we jumped at the chance.”

Other local pop-ups that will be featured in Murray’s this season include Rebel Taqueria, Pub Fare, and Kwei Fei. A full schedule is available at riverdogs.com/tickets.

Continuing the live and local theme, in partnership with 105.5 The Bridge, the RiverDogs will showcase local artists with a musical act each week that will provide entertainment and ambiance between innings as part of the in-game entertainment. Each Tuesday home game will also feature a different celebrity guest PA announcer.

Charlestonians that get to the ballpark early can also take part in a local farmer’s market on the main concourse. The market begins at gates open one hour prior to the first pitch and continues into the ballgame.

The RiverDogs have been a staple of the city of Charleston for nearly a quarter century as they celebrate their 25th season in club history in 2018.