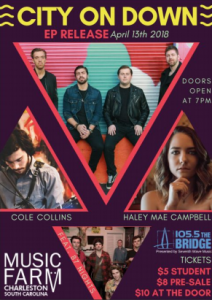 Local band City on Down will be kicking off their 2018 Used to be Young EP Release Tour with a live performance at the Music Farm on April 13th. Haley Mae Campbell, Cole Collins, and 87 Nights will also perform at the show.


City on Down is an Alternative Rock/Synth-Pop band behind the award-winning single, “All on You.​” At the 2017 Independent Tone Awards, the song earned Pop Single of the
Year. The group also won the Alternative Rock Band of the Yea award.

Doors for the band’s Music Farm show open at 7 pm. The concert begins at 8 pm. The event is open to all ages, but there is a $3 cash surcharge for anyone under 21.