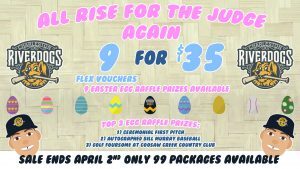 With their 25th season on the horizon, the Charleston RiverDogs are looking back fondly on some of their greatest players. After just one full season in the big leagues, reigning Rookie of the Year Aaron Judge is already in the conversation as one of the club’s most impressive alumni. In honor of the Yankee slugger, the RiverDogs are offering fans the chance to “all rise” with a limited time offer flex ticket plan.

With just 99 packages available, each All Rise ticket plan customer will be entered to win RiverDogs prizes including throwing out a ceremonial first pitch, an autographed Bill Murray baseball, and four rounds of golf at the Coosaw Creek Country Club, with nine winners for nine different prizes being selected via a Facebook Live Easter egg drawing on Tuesday, April 3 at 12 noon.

“We think this is a great opportunity for fans to kick off their Spring right, and celebrate Judge’s achievements from his rookie campaign,” said RiverDogs Director of Ticket Sales Garret Randle. “Fans have the chance to win some truly Judgian prizes with our Easter Egg raffle and enjoy some baseball at The Joe to start the season.”

For $35, All Rise ticket packages include nine flex vouchers, each redeemable for a grandstand level ticket for any April or May game (excludes Opening Night, April 12) at The Joe this season that can be redeemed at any time.

A member of the RiverDogs in 2014, Judge made his pro debut and clobbered his first nine professional home runs with Charleston before making his rookie debut with the Yankees in 2016. In his first full season last year, he set rookie records for home runs (52) and walks (128) while being selected unanimously as the AL Rookie of the Year.

As part of their “175th season in dog years,” the RiverDogs will celebrate some of their most prestigious alumni all year long as they look back on nearly a quarter century of RiverDogs baseball. The club will wear throwback uniforms from their inaugural ’94 season every “Way Back Wednesday” at The Joe which will also feature former player appearances and even an Aaron Judge tape measure giveaway on June 13.

The Charleston RiverDogs, the Class A affiliate of the 27-time World Champion New York Yankees, are Charleston’s leader in affordable sports entertainment. Recently recognized with the Bob Freitas Award as the top Class A operation by Baseball America in 2017, the RiverDogs are coming off their most successful season when they welcomed over 300,000 fans through the turnstiles for the first time in franchise history.

RiverDogs single-game tickets, including options to the Riley Park Club, are now available for the 2018 campaign, the club’s 25th season as the RiverDogs and their “175th season in dog years.” The RiverDogs begin the season at home on April 12 when they host the Kannapolis Intimidators at The Joe after a week on the road. Ticket information can be secured by contacting the box office at (843) 577-DOGS (3647) or online at www.riverdogs.com/tickets.