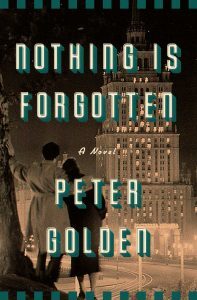 Buxton Books has invited author, journalist, and historian Peter Golden to speak at a luncheon at Congress in Mt. Pleasant on Friday, April 27th at noon. Golden will discuss his new novel, Nothing is Forgotten, and the Cold War, the Holocaust, and how they impact the present, particularly pertaining to our relationship with Russia.

Golden’s novel “mines the past of the Cold War and Holocaust to illuminate the present, captivating readers through twists and turns in multiple locations across continents to solve the mystery of a grandmother’s murder in South Orange, New Jersey.” It’s based on actual events and research conducted by the author. The story begins in 1965 when Michael Daniel’s grandmother Emma Dainov, a lovely woman who dispenses treats to children in her candy store, is murdered. Learning his grandmother had a hidden past that might have motivated her killing, Michael begins a quest, starting in Munich.

You can pre-order the book here.

Tickets for the luncheon are $25 per adult, $45 for couples, and $22 for seniors and East Cooper Newcomers Club members. Tickets will be available here or by calling  203-451-9148. Congress located at 1035 Johnnie Dodds Blvd. in Mount Pleasant.