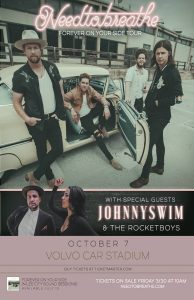 Local rock band NEEDTOBREATHE will bring their “Forever On Your Side” tour with special guest JOHNNYSWIM to the Volvo Car Stadium on Sunday, October 7th. Tickets and VIP packages go on sale Friday, March 30th at 10 am.


The headliners have released six studio albums including 2016’s Hard Love, which peaked at No. 2 on the Billboard 200 chart.

JOHNNYSWIM is a folk/soul/pop duo that has released 4 albums and 3 EPS. They have been featured on The Tonight Show with Jay Leno and The Late Late Show with Craig Ferguson.

Tickets to the local show may be purchased here. One dollar from each ticket sold will go to the OneWorld Health.