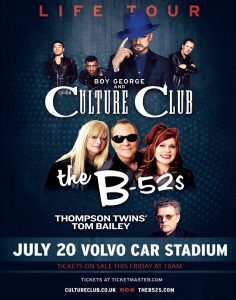 The Life Tour starring Boy George & Culture Club and The B-52s, two of the biggest pop acts in the 80s, will stop at the Volvo Car Stadium on Friday, July 20th at 7 pm. The Thompson Twins’ Tom Bailey will open the show.

With singer Boy George leading the charge, Culture Club tallied seven straight Top 10 hits in the UK and nine Top 10 singles in the US. Those chart-toppers include “Do You Really Want to Hurt Me,” “I’ll Tumble 4 Ya,” “Karma Chameleon,” and “The War Song.”

In addition, the group has sold over 50 millions albums worldwide and earned a Grammy Award.

Tom Bailey was the lead singer of the British new wave band the Thompson Twins. The group’s 1984 album Into The Gap went platinum in the U.S. The band’s final album was released in 1991. Bailey went on to perform solo and in Babble, an electronica duo.

Tickets for the Daniel Island show go on sale Friday, March 23rd at 10 am.
–