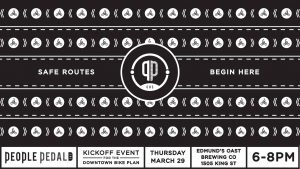 In 2014, Charleston Moves and the City of Charleston began collaborating to develop a “minimum grid” for moving around the peninsula by bicycle. As part of this process, over 1,300 constituents submitted their preferred bicycle routes to inform the network. After nearly four years, the People Pedal CHS plan is ready for unveiling! This kickoff event on March 29th is the first opportunity for citizens to get a close-up look at the finalized maps, ask questions of City and Charleston Moves staff, and learn about what’s next.

“The community has been waiting excitedly for this safe network design,” says Katie Zimmerman, Executive Director of Charleston Moves. “In order to minimize motor vehicle congestion, improve health and public safety, and provide more equitable modes of transit in a dense environment like the peninsula, we must have appropriate bicycle infrastructure. These maps give us and elected officials the blueprint for advocacy, and the city, county and state transportation staff a plan of action for the downtown area.”

In terms of actionable next steps, the community will be able to voice their support for implementing this plan, in addition to signing up to assist Charleston Moves in a variety of ways: surveying, installing demonstration projects, or hanging a People Pedal CHS map at their business. Mark your calendar, because you’re invited!

Charleston Moves encourages mobility by bicycle and on foot for the improved health and well-being of greater Charleston – our people, neighborhoods, business districts and overall economic competitiveness. Join the movement and support our work by visiting CharlestonMoves.org!

Follow us
Related Topics:charleston movesPeople Pedal CHS
Up Next

SKIRT! Magazine and Athleta Team Up for Moms’ Brunch Event

Kishi’s Turkish Oushak Rug Show returns to Mt. Pleasant from November 14th to 20th, 2022 with thousands of unique and...