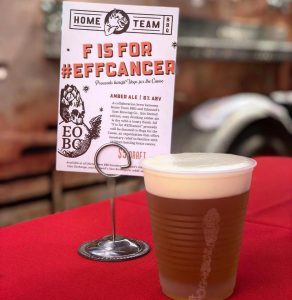 Home Team BBQ (HTBBQ) and Edmund’s Oast Brewing Co. (EOBC) recently partnered to brew a special collaboration beer called “F is for #Effcancer,” the proceeds from which are donated to Hogs for the Cause. The amber ale debuted on February 24th at HTBBQ’s Rock the Block fundraising event, and is currently available on draft for $5 at all Home Team BBQ locations and EOBC.

According to a press release, the beer is a 6% ABV amber ale that features “hints of orchard fruit and flowers on the nose, coupled with freshly toasted bread and hints of caramel on the palate. The finish is dry and quick, and it pairs perfectly with the delicious smoked meats and other plates served at Home Team BBQ.”

Circa 1886 Hosts Bourbon and Bacon Dinner on April 11th