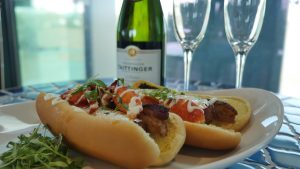 Where some might commemorate their silver anniversary with an expensive timepiece, the Charleston RiverDogs are marking the milestone with an all-new ballpark hot dog. Fans at The Joe can chomp into the brand-new Silver Anniversary Dog, an all-beef frankfurter wrapped in edible silver leaf and topped with pork belly, lobster and champagne, one of 12 new food items announced by the RiverDogs for the 2018 season.

The silver garnished, all-beef, wagyu hot dog is capped with pan-seared pork belly, butter poached lobster, and a white truffle champagne aioli. Fans that really want to celebrate the RiverDogs’ milestone year in style will also be able to purchase the “175th season in dog years” package (right) that includes two Silver Anniversary Dogs, champagne bottle service, and a table for two for $175 at The Joe this season. 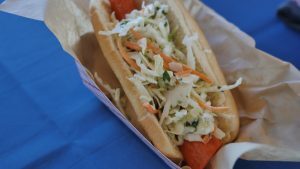 Along with their innovative all-beef options, the RiverDogs food & beverage staff have worked in conjunction with MUSC Health this offseason to continue to provide healthier alternatives at each of their signature stands. Paired alongside the Silver Anniversary Dog at “Dog World” this year will be the Roasted Carrot Dog (left), finished in the smoker and topped with honey sriracha and a refreshing cilantro slaw, and a Vegan Dog adorned with black bean and roasted corn relish.

“We can’t think of a better way to celebrate our 25th season,” said RiverDogs Food & Beverage Director Josh Shea. “Our Silver Anniversary Dog is one of several new items we’re excited to deliver our fans this year, along with continuing to provide healthy alternatives with the help of MUSC.” 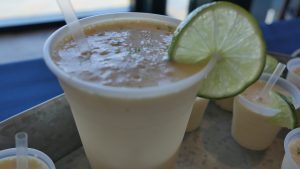 In addition to the brand-new dogs, the 2018 food lineup will feature new twists on fan favorites, including the Margarita Beer Shake (right) to be served at the Pie House along with the “Kitchen Sink Chips,” a new twist on the kitchen sink nachos still guaranteed to include “everything but the kitchen sink.”

Not only will a host of new items be featured on the menu boards throughout the park in 2018, fans will also notice an all-new concession stand as they enter The Joe’s main gates as the Landshark Island Burger Shack will offer three unique grilled patty options this year. The Wagyu Island Burger features an all-beef wagyu patty and Spam bacon topped with pineapple and chow chow relish. The Coastal Shrimp Burger will deliver with a seafood shrimp patty and avocado aioli. Finally, the Beyond Burger is a brand-new vegan option that imitate and looks like a real beef burger with an infusion of beet juice that’s topped off with baby spinach and an heirloom tomato.

Stop by “Cup of Joe,” another new stand at the park this year, for a selection of nitro brew and traditional cold brew coffees perfect for a sizzling summer evening. Café salads and sandwiches will also be available, including a harvest salad featuring an entire head of Hydroponic bib lettuce stuffed with seasonal fruit and served up in a souvenir baseball helmet.

Now featured at the “Scoops” stand, the RiverDogs will offer a Caribbean Smoothie, a sugar-free, gluten-free, and all-natural frozen fruit drink, and a Brie, Apple, and Honey Grilled Cheese.

“Pie House” will serve up more pies than ever before with a new line of stone fired pizzas, including a barbeque pork and a veggie pizza.

Back after a one-year hiatus, “Craft Spuds & Suds” returns and will be home of all Shock Top beers at The Joe, along with the new “She-Crab Sweet Fry,” a she-crab soup inspired topping adorning a basket of sweet potato fries. Also featured at Suds is the new twist on the Kitchen Sink Chips, a hearty portion of house chips, smoked slab bacon, sliced avocado, pulled pork, beer cheese, sour cream, and green onions. 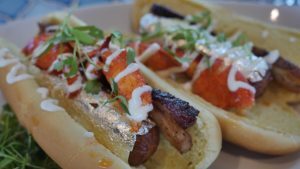