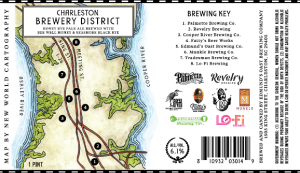 The Charleston Brewery District, a two-and-a-half-mile swath of the peninsula, is organizing a Release Party for their first collaboration beer on Saturday, March 17th at Edmund’s Oast Brewing Co.

The Release Party will also feature beers from each participating brewery, all available a la carte. District brewers will be on-hand to celebrate the occasion.

Get Shamrocked at The Brick this St. Patrick’s Day