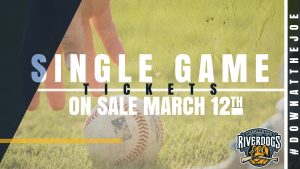 Whether you’ve circled your calendar for a popular promotion or are looking to grab a spot for Opening Night, RiverDogs fans will soon be able to book their seats for the 2018 season. The Charleston club has announced that single-game tickets for their “175th season in dog years” will be available online at riverdogs.com/tickets starting at midnight on Monday, March 12 and in-person or by phone at the box office beginning on Wednesday, March 14 at 9 am.

“Single-game tickets going on sale marks another milestone that baseball is almost back at The Joe,” said RiverDogs President and General Manager Dave Echols. “We want to encourage our fans to plan ahead, especially for some of our more popular nights, as the first pitch of the season will be here before we know it.”

Single-game buyers will have their first shot at reserving seats to the RiverDogs’ home opener against Kannapolis on Thursday, April 12 at 7:05 pm, as well as a July 4 home tilt versus Augusta at 6:35 pm, the first Independence Day game at The Joe since 2015.

Tickets will also go on sale for the RiverDogs’ exhibition opener as they face the Myrtle Beach Pelicans, the Advanced-A affiliate of the Chicago Cubs, in the “Battle of the Beaches” on Wednesday, April 3 at Riley Park with the third annual event slated for a 7:05 pm first pitch.

Ticket prices at The Joe continue to be tremendous value, starting at just $6 when purchasing before the day of the game. Diamond view seats can be booked for $18 each, field view at $16, and grandstand for $8, all saving $2 off the day-of admission price.