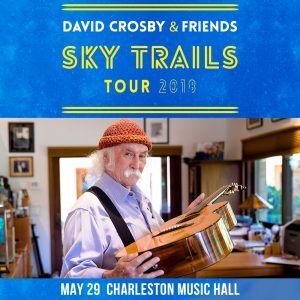 On Tuesday, May 29th, the Charleston Music Hall will present An Evening with David Crosby & Friends. The performance begins at 7:30 pm.

The legendary singer-songwriter and social justice activist is a two-time Rock and Roll Hall of Famer, inducted as a member of both the folk-rock band The Byrds and the iconic Crosby, Stills & Nash. His six-decade career has included songs that are considered cultural touchstones for more than three generations.

For this Charleston concert, Crosby will be performing the entirety of his new album, Sky Trails, along with a number of his other hits. Tickets go on sale Friday, March 9th at 10 am.

David Crosby & Friends last performed at the venue in May 2017.
–

Follow us
Related Topics:charleston music hallDavid Crosby
Up Next

Shaggin’ on the Cooper Series Returns in April

The Alley to Host Fashion Week Kick Off Party