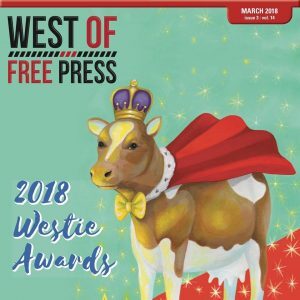 After 13 years as a weekly community newspaper, West Of re-launched on Thursday, March 1 as the West Of Free Press, a monthly newsmagazine for the West Ashley area. The first issue of the West Of Free Press is the 2018 Westie Awards issue. This year 16 individuals who were nominated by people in the community will be honored for helping make West Ashley a better place over the last year. They range from teachers and coaches to community leaders and politicians, from builders and architects to beer makers and pizza makers to community activists and volunteers.

“This issue officially marks the beginning of a new chapter for West Of,” said Lorne Chambers, West Of founder and editor and publisher for the West Of Free Press. “Much like West Ashley itself in recent years, West Of is also receiving a much-needed shot in the arm.”

As revitalization efforts continue to sweep across our region, its community newspaper has also undergone a revitalization. “For far too long West Ashley has been promised a better tomorrow. Well… tomorrow is here now and the 2018 Class of Westie Award winners have, each in their own way, made our tomorrow better. And we applaud them for their efforts,” said Chambers.

On Monday, March 5, from 6-8 p.m, the 2018 Westie Award class will be honored at a reception and presentation at The Schoolhouse, West Ashley’s newest venue space, located at 720 Magnolia Road. The event will also serve as the official launch party for the new and improved West Of Free Press.

The new publication is printed with a larger format on a much-higher quality paper stock. So photos look better and articles are more researched and thoughtful. Not only is the publication physically larger, but the first issue as the West Of Free Press was 48 pages, quite a leap from the usual 20-page weekly paper.

The media landscape has changed dramatically in the 13 years since West Of first began publishing, especially in the world of print media. “We’re small enough and flexible enough that we can adapt, and this seemed like the best move for us and our advertisers,” said Chambers.

While there are now more articles and new sections, you will still find quality reporting and good journalism. “Sure we’re probably not breaking news once a month. But then again, we weren’t necessarily breaking news once a week either. That was never our role.” West Of Free Press will now offer more insightful and thoughtful articles, taking a more in-depth look at not only news stories, but also the arts and dining happenings in West Ashley.

“We may not be printed as frequently, but we will work hard to bring you a better publication. Because West Ashley deserves better.”

Below is the list of the 2018 Westie Award winners:

Follow us
Related Topics:West Of Free Press
Up Next

RiverDogs, Blackbaud Partner for Staff Volunteer Days in the Lowcountry