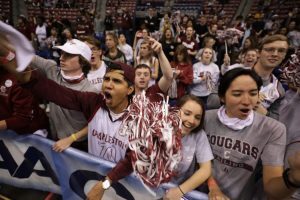 Now that the College of Charleston Men’s Basketball team has punched its ticket to the Big Dance, the Cougars will host an NCAA Selection Show Watch Party on Sunday, March 11, 2018, at TD Arena.

The event is free and open to the public. Doors will open at 4:30 pm. The 2018 NCAA Division I Men’s Basketball Championship field will be announced live on TBS at 6 pm (EST).

Join the Cougars as they celebrate their Colonial Athletic Association tournament championship title and find out their opponent, seeding and postseason destination.

Autograph opportunities with the team on the arena concourse will precede the selection show, with team introductions and remarks by Head Coach Earl Grant and team captains Joe Chealey and Cameron Johnson.

A live deejay will spin tunes throughout the celebration, and a photo booth will be set up on the concourse where fans can take their photo with both the CAA regular-season and tournament championship trophies.

Concessions and the Cougar Spirit Shop will also be open for the event. The first 500 fans will receive a commemorative team poster, while supplies last.

Championship gear is currently available for purchase online at www.thecollegelockerroom.com and will soon be available at the College of Charleston Bookstore and Palmetto Moon.

Please Note: For fans looking to attend the watch party, please plan accordingly for parking and driving time to the arena, as Charleston’s Second Sunday on King Street will be going on during the watch event.

Shaggin’ on the Cooper Series Returns in April

The Alley to Host Fashion Week Kick Off Party