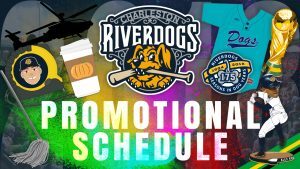 Coming off another record-setting season, the Charleston RiverDogs’ have put together another exciting and creative promotional calendar for 2018. The schedule has something for everyone, from bobsledding to bullpenning, exciting new theme nights punctuate the calendar that also includes plenty of old fan-favorites.

The RiverDogs will celebrate their club’s history every “Way Back Wednesday” with throwback teal and purple uniforms and $4 general admission prices from their inaugural 1994 season. The club will highlight some of the best to suit up in a RiverDogs uniform with giveaways including an Aaron Judge tape measure and Alex Rodriguez bobblehead, along with guest appearances by some of the team’s all-time greats.

Also new to the weekly promo lineup, “Live and Local Tuesdays” will celebrate the Charleston community with local acts, food, and artists every Tuesday home game at The Joe. The RiverDogs’ popular Holy City uniforms make a return on MUSC Health Family Sundays, and the club will once again open the gates to their four-legged fans every “Monday Dog Day,” featuring dollar beers and hot dogs. “Budweiser Thirsty Thursdays” are bigger and better than ever, featuring dollar brews in the Budweiser Ashley View Pub. Every Friday, fans can catch a Home Telecom Postgame Fireworks extravaganza.

April 14: Joseph P. Riley and the Amazing Technicolor Ballpark: Don’t miss the most colorful night of the season, as the RiverDogs top last year’s Silly String Night phenomenon with another spectacle not to be missed. Fans will enjoy colorful visuals, food specials and more, all building up to an explosion of color during the seventh-inning stretch. Each fan will be given a packet of color powder that will transform The Joe into the most colorful ballpark in the country.

April 26: Basic Night: The Dogs add to the “Halfway to…” trend in theme nights by honoring “Halfway to Pumpkin Spice” in the all-encompassing Basic Night. Profess your love for avocado toast, Uggs, Trader Joe’s, Mean Girls, and more. Scented candles, “Name that Kardashian,” and selfie photo opportunities will engage fans throughout the game on the best night in the minors to see the stars of tomorrow while discussing your favorite season of The Bachelor.

May 1: World’s Cleanest Ballpark: The RiverDogs will finally clean up their act on the most pristine night in baseball history. The club will prepare with a thorough cleansing of The Joe leading into the homestand, and keep the grounds immaculate with extra ushers, bathroom attendants, and squeaky-clean humor on a night that promises a concourse so spotless, you could eat a Homewrecker Dog right off it. After last year’s Silly String Night and the upcoming technicolor ballpark triumph, the RiverDogs’ cleaning staff deserves a night off.

May 3: Jamaican Bobsled Night: The RiverDogs celebrate the 25th anniversary of Cool Runnings, the story of Jamaica’s first bobsled team to qualify for the Olympic Games, with a guest appearance by actor, comedian, and Runnings star Doug E. Doug. The RiverDogs will hold onto their lucky eggs as they don specialty Team Jamaica jerseys that will be auctioned off during the game. Fans will have the chance to meet and greet with Sanka Coffie himself and the club will welcome in guest emcee, comedian, and the host of ESPN’s Sportscenter on Snapchat, Cy Amundson.

June 2-3: Larry Doby Heritage Weekend presented by MUSC Health: The RiverDogs celebrate the legacy of the first player to break the color barrier in the American League during Larry Doby Heritage Weekend. Along with celebrating the life of the Hall of Fame great, the RiverDogs will provide tickets to underrepresented youth sports groups in the area and honor the 1955 Cannon Street All-Stars, the first black Little League in the state of South Carolina, barred from participating in the Little League World Series. For the Sunday game, the RiverDogs will celebrate a Day of Unity, where all fans are encouraged to come together in harmony, embracing the strength and fellowship of the Holy City. Also, per tradition, the RiverDogs will don the uniforms of the Newark Eagles, the Negro League club where Doby spent five seasons, on Sunday while the visiting Delmarva Shorebirds will wear the jerseys of the Homestead Grays.

June 12: Charleston’s Funniest Home Videos: The RiverDogs will turn the show over to the fans! In the belief that the best ideas are stolen, Charleston is turning one of the most popular TV shows ever into a night out at The Joe. Submit your best home footage and enter for a chance to win as one of the finalists featured at the night’s game and find out if you have Charleston’s funniest home video.

June 15: Disney Sing-along and Fireworks: Back by popular demand, The Joe hosts the happiest sing-along on Earth with everyone’s favorite music playing all night long on an evening of classic and current hits from Disney, culminating in a Home Telecom Friday Fireworks. Be our guest and join us for a fun night for kids and adults alike.

June 16: World Cup Night: Revel in the glory of the “beautiful game” as the RiverDogs bring the magic of the world’s biggest sporting event to Riley Park for a night. Get your very own RiverDogs kit as one of the first 1,000 fans through the gate and take in a cracker of a match as the RiverDogs face in-state rival Greenville. The club will help teach U.S. fans the language of the game, so you don’t sound like a “right muppet” in your local pub. Stick around for a postgame kick-around on the field.

July 4-6: Three-Day Independence Day Celebration: Baseball on July 4 returns to Charleston for the first time since 2015 as the RiverDogs kick off three days celebrating the Stars and Stripes. July 4 will feature an Independence Day Fireworks Super Show presented by WOW!, and fans can catch another postgame extravaganza on Friday, July 6. Don’t miss a special “Red, White, and Brews” Thirsty Thursday to keep the freedom ringing throughout the week.

July 11: “Bullpenning” Night: The game is constantly changing, and the RiverDogs are always on the cutting edge. It’s a night for sabermetric nerds and middle relievers alike as the Dogs celebrate the increasing bullpen usage in baseball. Choose your side as you either embrace the rich intricacies of the “third time through the order penalty,” or cheer for a complete game and the rubber arm starters of yesteryear. The RiverDogs will turn the spotlight on their own bullpen as well, featuring a red-carpet introduction of the Charleston relief corps pregame, and highlight some of their former stars who helped the Yankees bullpen their way through the 2017 AL Wild Card Game. Former R’Dog innings-eater and Major Leaguer Dan Wheeler will also be on hand to sign autographs as part of a “Way Back Wednesday.” The Charleston front office will bring the hook all night long as they relieve their PA announcer, ushers, interns, concession staff, and more.  Brian Kenny, your tickets will be at the will call window.

July 12: Buzzfeed Night: Do you find yourself constantly taking quizzes to assess your personality type? Are GIFs the only way you know how to express your feelings? Is making a top-25 list honestly just the easiest way to organize your thoughts? It’s not clickbait; it’s the RiverDogs’ Buzzfeed Night at The Joe. Come out for an evening of internet frivolity as the team highlights the website that appears more frequently in your search history than you care to admit. Fans can take their very own RiverDogs Buzzfeed quizzes answering deep questions like “What RiverDog are you most like?,” “Which Charlie logo is so you?,” and “Who is your RiverDogs celebrity crush?” (Spoiler: it’s Aaron Judge).

August 7: Year of the Dog Celebration: After back-to-back playoff appearances, it finally feels like it’s the RiverDogs’ year. No, really — It’s the “Year of the Dog” according to the Chinese Zodiac calendar and the Dogs are celebrating with a new year’s party for the ages, marking the halfway point of the RiverDogs’ season of destiny. Fans will receive complimentary fortune cookies at the gate while supplies last.

August 13: MUSC Health Rainbows Night: The RiverDogs turn back the clock to the days when names like Hall of Famer Roberto Alomar, Sandy Alomar, and Carlos Baerga roved the infield of College Park. The RiverDogs will become the Charleston Rainbows again, complete with Rainbows uniforms, for one night only in conjunction with Charleston Pride, who will receive the proceeds of the jerseys auctioned off during the game.

“Way Back Wednesday” Appearances and Giveaways

May 2: Catch a special appearance by RiverDogs alum Mitch Hilligoss, who most notably hit safely in 38-straight games with the Dogs from April 18-June 1, 2007, still standing as the South Atlantic League record.

June 13: Aaron Judge Night, featuring a Judge Tape Measure Giveaway: Gauge your own tape measure blasts or do a little home improvement around the house as one of the first 1,000 fans through the gate to get your hands on the most functional giveaway item in the minor leagues on a night celebrating the reigning Rookie of the Year and RiverDogs alum.

*The RiverDogs promotional calendar is subject to change.

RiverDogs single-game tickets go on sale starting on Monday, March 12 online at 12 a.m. and at the box office beginning at 9 a.m, with prices starting as low as $6. The RiverDogs begin their home slate on Thursday, April 12 when they host the Kannapolis Intimidators at The Joe after a week on the road and an exhibition opener at Riley Park on April 3 against Myrtle Beach. Ticket information can be secured by contacting the box office at (843) 577-DOGS (3647) or online at www.riverdogs.com/tickets.