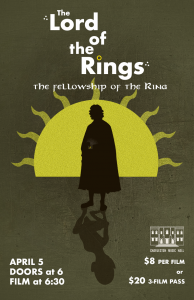 In April, the Charleston Music Hall will present The Lord of the Rings Trilogy film series – EXTENDED VERSIONS. Yup, the extended films – that means 682 minutes of Middle Earth adventure.

Anyone who comes dressed up as a Wizard, Hobbit, Elf, Dwarf, Rider of Rohan, Ring Wraith, Gollum and/or Smeagol, Orc, Uruk Hai, Ent, Tom Bombadil, Balrog, Spider, Eagle, Troll, or Goblin will gain free admission to the films. However, you cannot just throw on your favorite t-shirt and call it a day. The Box Office attendant will judge quality of costume and deem you worthy of free admission at the door. The best costume over the 3 nights will be given a replica of THE RING and Gandalf’s Staff.

The venue will screen The Fellowship of the Ring on April 5th, The Two Towers on April 11th, and The Return of the King on April 24th. All films are $8, but you can buy a 3 film pass for $20. All films start at 6:30 pm and will have a brief intermission. Tickets on sale now. 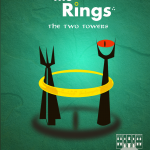 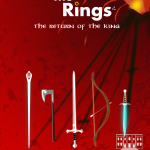 Follow us
Related Topics:charleston music hallThe Lord of the Rings
Up Next

The Alley’s Hoop Fever Challenge Could Net You $500