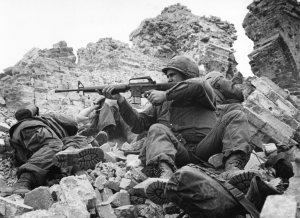 On March 1st at 7 pm, Patriots Point Naval & Maritime Museum will commemorate the 50th anniversary of the 26-day Vietnam War Battle for Huế (pronounced “way”) City by hosting a discussion among several highly-decorated Marines who fought in it. The symposium is free and will take place aboard the USS Yorktown.

In addition to Marines who fought in the Battle for Huế, famed military photographer John Olson, who covered the battle for Stars and Stripes, a Department of Defense newspaper, will share his unique perspective. Olson was awarded the Robert Capa Gold Medal by the Overseas Press Club of America for photographs he took during the 26-day battle that were published in LIFE magazine.

“Fighting house-to-house is the dirtiest of all fighting,” said Maj. Ron Christmas. “Just as a rat must be drawn from his burrow to be eradicated, an enemy soldier, burrowed in a building, must also be pulled from his hiding place to be eliminated. Normally, he will not come out without a fight. The attacker must go in and dig him out.”

The Battle for Huế City began January 31 and lasted through March 3, 1968. It was the longest and bloodiest battle of the North Vietnamese Army’s Tet Offensive campaign. Media coverage of the 26-day fight marked a political turning point in the Vietnam War as a whole. Three U.S. Marine battalions consisting of fewer than 2,500 men attacked and soundly defeated more than 10,000 entrenched enemy troops in a city that was considered Vietnam’s spiritual and cultural center.

The panel of Marines will discuss the situation in Vietnam leading up to the Battle for Huế City, the battle itself, the impact the change from jungle to urban warfare had on the U.S. military, and the effect the media coverage had on support of the war back in the United States.

The Battle for Huế City resulted in the death of 216 American troops and more than 1,300 were wounded. Some 5,800 Vietnamese civilians were killed, at least 2,800 of which were murdered by the Viet Cong. The urban battlefield left 80 percent of the historic city of Huế in ruins, and created 116,000 homeless refugees.

Patriots Point Naval & Maritime Museum is a registered partner of the Department of Defense’s Vietnam War 50th Anniversary Commemoration. “Taking the Fight to the Streets: Battle for Huế City” is part of the museum’s ongoing efforts to honor and welcome home Vietnam veterans.