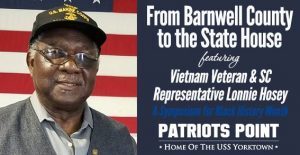 On Friday, February 23rd, South Carolina State Representative and Vietnam War Veteran Lonnie Hosey will be the focus of Patriots Point Naval & Maritime Museum’s annual Black History Month Symposium aboard the USS Yorktown. Hosey will be joined by two students and future leaders from schools in his district who will participate in an open discussion about what it takes to succeed in life. The free program entitled “From Barnwell County to the Statehouse” is open to the public and will begin in the Smokey Stover Theater at 10 am.

A native of South Carolina, Hosey joined the Marines in June 1966 and served with the First Marine Division in Vietnam in 1966 and 1967 in almost constant combat. He was wounded twice and earned a Purple Heart for his service. As a result of serious bullet and shrapnel wounds, Sergeant Hosey spent 13 months in the Charleston Naval Hospital before being honorably discharged from the Marine Corps in 1969.

After serving in the Vietnam War, Hosey attended and graduated from Voorhees College. He worked for decades in higher education before he decided to run for the South Carolina Statehouse in 1999. He has served, representing District 91 (Allendale, Barnwell and Orangeburg Counties), since that time.

“We are honored to have this opportunity to shed light on a man who has done so much to serve his state and his country,” said Patriots Point Executive Director Mac Burdette. “Representative Hosey was raised during a time of civil rights struggles, and yet he overcame these challenges and has spent his life giving back to his country, his state, and his community. The discussion that will take part on stage with the students about how to chart your own path for success is a great lesson for all kids to hear and they will no doubt learn quite a lot from Representative Hosey’s own life experiences.”

In addition to the two students who will participate in the program on stage with Representative Hosey, students from two elementary schools in his district—Allendale and Barnwell Elementary Schools—will attend the symposium onboard the USS Yorktown. Also planning to attend is Allendale School District Superintendent Dr. Walter Tobin.

Admission and parking for “From Barnwell County to the Statehouse” is free. The program, which will also be streamed live through the museum’s social media pages, is part of the ongoing “Ordinary People Doing Extraordinary Things” symposium series.