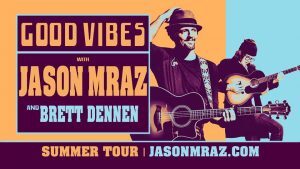 Singer-songwriter Jason Mraz will perform at the Volvo Car Stadium with Brett Dennen on Wednesday, August 15th at 7:30 pm. The show is part of Mraz’s “Good Vibes Summer Tour.”


The two-time Grammy Award winner has sold more than sold over seven million albums and over 11.5 million downloaded singles. He is best know for songs like “I’m Yours,” “The Remedy (I Won’t Worry),” “I Won’t Give Up,” and “Lucky.”

Three of his five studio albums have been certified platinum, with four peaking in top five of the Billboard 200.

Dennen is a folk/pop singer and songwriter who has released six studio albums. His music has appeared in television shows like Parenthood, Wizards of Waverly Place, and About A Boy

Tickets for their Daniel Island concert go on sale Friday, February 16th at 10 am. Click here to purchase.