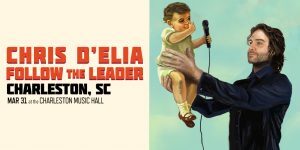 UPDATE on 3/6/18: Due to high demand, the Charleston Music Hall has added another Chris D’Elia show at 10:30 pm on Saturday, March 31st. Tickets can be purchased here.

D’Elia is one of the most sought after performers in the comedy world. He is best known for his stand up and starring role on the NBC comedy series Undateable. His latest standup special, Man on Fire, is now on Netflix.

Currently, the comedian hosts a successful weekly podcast called Congratulations with Chris D’Elia. The show launched in February 2017 and has since been a mainstay on iTunes’ comedy podcast charts.

D’Elia is also signed on for a major supporting role in the Mitja Okorn-helmed romantic drama Life In A Year, joining Cara Delevingne, Jaden Smith, Nia Long, and Cuba Gooding Jr. He can also be seen in the Netflix horror comedy Little Evil opposite Adam Scott and Evangeline Lilly.

Tickets are $37 each. There are a limited number of VIP Post Show Meet & Greet tickets available for $70 each. Dinner & show option available for an additional $32. Public on-sale begins Friday, February 16th at 10 am. Click here for more info.

Follow us
Related Topics:charleston music hallChris D’Elia
Up Next

“Mystery Meat” Returns to Theatre 99 for a Second Helping