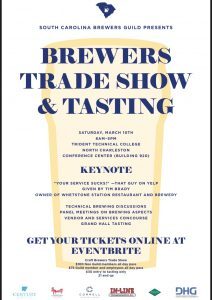 The SC Brewers Guild will be hosting a Trade Show on Saturday, March 10th on the Trident Tech  North Charleston campus. The event starts 8 am and lasts until 5 pm, and will consist of a series of informative talks that are specific to the craft beer industry, as well as a two-hour tasting as the grand finale.

These seminars will are designed for those who own breweries, those who plan on opening breweries in the future, and to further educate employees of brewhouses and homebrewers alike, as well as anyone else with a interest in the craft beer industry.

The Brewers Association’s Tim Brady will be giving the keynote speech, and there will also be representatives from Breiss, Yakima Hops, and Small Business Development of the Carolinas.

Tickets are $100 a person, or $75 for SC Brewers Guild members. This includes breakfast and lunch, entrance to all of the speeches, and the two-hour tasting. Craft beer fans who are interested in the tasting only can grab tickets for the final two-hours for $30, where they can drink different craft beers from all of the breweries that are attending the show. Tickets can be found here.