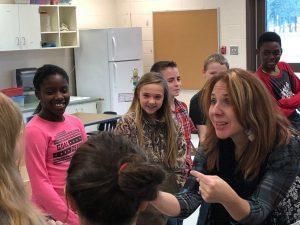 Storytree Children’s Theatre, a non-profit that makes theatre accessible for children of all ages and backgrounds, kicks off a week of workshops and performances based on the life of Harriet Tubman.

“Students are learning on their feet in an engaging way that allows for better understanding of this very important woman in our nation’s—and South Carolina’s—history,” Teralyn Reiter, Founder of Storytree Children’s Theatre says.

Storytree is meeting with a total of 9 schools to host 23 workshops of varying immersion: one shorter workshop, one hour-long workshop where students create original plays, and a third where two Storytree actors perform a brief history with students playing various characters related to Harriet Tubman. The workshops culminate in a performance of “Harriet Tubman and the Underground Railroad” by Virginia Repertory.

This event is part of Storytree’s new partnership with the Gaillard Education Initiative, which funds the workshops for schools. Announced last year, the Gaillard and Storytree work together to offer more arts to teachers and students in Charleston. This is part of that outreach program.

“Part of the mission of the Gaillard is the connection of educational performances to classroom curriculum,” Sterling deVries, Education Coordinator at Gaillard Education Initiative, says. “The talented teaching artists of Storytree use the South Carolina state standards, the content in the live performance, and their vast artistic knowledge to immerse students in the arts while embracing the rich history of our nation.”

Harriet Tubman worked as a spy, a scout, and nurse in South Carolina throughout the Civil War. She is a quintessential figure in American history and her life and works are being taught to students through artistic methods, bringing Tubman to life in ways that textbooks and lectures can’t always achieve.

“Curriculum infused with the arts—especially theatre—allows for students to develop their own relationship to the subject,” Reiter says. “It’s not just teaching for the test but also teaching for true understanding. I always like to say it gets it into their bones.”