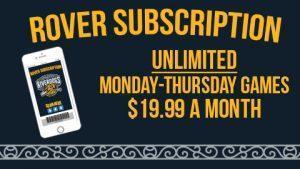 RiverDogs fans can cruise into Joe Riley Park this season with the all-new Rover Subscription, a first-of-its-kind ticket offer focused on convenience and flexibility.

For $19.99 per month, a Rover subscriber will receive a general admission or standing room ticket to every Monday through Thursday home date this season. The subscription can be cancelled at any time and allows fans to bypass ticket lines by accessing tickets on their phones. A limited number of subscriptions are available.

Subscribers will have access to some of the RiverDogs’ most popular promotional nights, including every Monday Dog Day and Thirsty Thursday, with up to 36 games included in a full-season subscription at a cost of less than $3 per game.

Rover Subscriptions can be purchased starting on Wednesday, February 7 by visiting riverdogs.com/rover or by phone at 843-577-DOGS (3649).

The RiverDogs’ full promotional calendar will be announced in late-February, and single-game tickets will go on sale starting on Monday, March 12th.