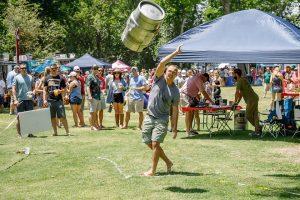 Carolina craft beer will take center stage at the seventh annual Charleston Beer Garden set for noon to 7 pm. on Saturday, May 19th at The Grove at Patriots Point. Tickets are on sale now for this daylong celebration. Options include general admission, VIP tickets, and a new Brew Pass for unlimited tastings.

Headlining the festival entertainment is Charleston favorite The Dubplates, whose latest album “Box Full of Steel” topped the Billboard charts as the No. 1 reggae album. Opening for The Dubplates is roots rock band Sol Driven Train, another fan favorite in the Lowcountry

Throughout the day, festival-goers can join in the Yelp! Beer Games, including arm-wrestling, pony hops, hands-free pizza eating, cornhole, keg tossing and much more.

The Homebrewers’ Village, which features a wide selection of homebrewers from Charleston offering samples of their homebrews, will return this year. A panel of local judges will select a homebrew champion. Homebrewers interested in participating can fill out an application at www.CharlestonBeerGarden.com. Applications are also being accepted for food vendors as well as retailers who want to participate in the Vendor Village.

Early-bird tickets are $15 for general admission and $35 for VIP; early-bird ticket quantities are limited. GA tickets include five beer tasting tickets. VIP tickets include 15 tasting tickets plus access to the VIP Oasis with shade tent, private seating and bathrooms, fans and the VIP Swag Bar. New this year, VIP guests have expedited entrance and are admitted into the festival 30 minutes early. A designated driver ticket is available for $15 and does not include a beer mug or any tasting tickets.

New for 2018 is the Brew Pass for $75, which includes general festival admission plus a commemorative Brew Pass glass and unlimited 2- to 3-ounce tasting from all breweries. Only 175 Brew Pass tickets are available.

For more information and to purchase tickets, visit www.CharlestonBeerGarden.com. The Charleston Beer Garden is a fundraiser for Lowcountry AIDS Services. Proceeds from the event will support LAS in its work helping people living with HIV/AIDS in the greater Charleston area as well as its community outreach, education and prevention programs.