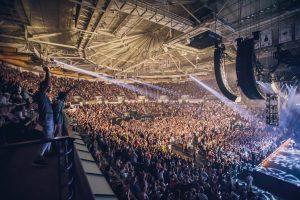 On January 29th, 1993, the North Charleston Coliseum opened its doors for the first time. The debut show was “World Figure Skating Champions” featuring Olympic champions Elizabeth Manley and Marina Klimova & Sergio Ponomarenko. The next night, country music superstars Alan Jackson and Lorrie Morgan took the stage for the first concert in the Coliseum. In the years following, the biggest names in music and entertainment would make North Charleston a regular stop on their world tours.

On October 23rd, 1993, the South Carolina Stingrays played their first game in the Coliseum. The ECHL hockey team has called the North Charleston Coliseum ever since. During this time they have played nearly 900 home games and won the Kelly Cup Championship three times (1997, 2001, and 2009).

Throughout 2018, the Coliseum will celebrate special memories and fun facts from the last twenty-five years with a “This Day in Coliseum History” social media promotion. The public is encouraged to share their favorite memories as well. The Coliseum Facebook page is located at www.Facebook.com/NorthCharlestonColiseumandPerformingArtsCenter. The Coliseum Twitter and Instagram handle is @NChasColiseum. The hashtag for the promotion is #NCC25.

Here are some fun facts and numbers behind the 25-year history of the North Charleston Coliseum:

Total number of people who have attended events

Most concerts played at the Coliseum: