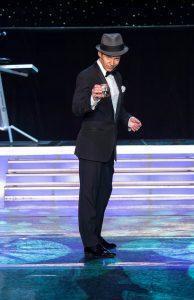 Brad and Jennifer Moranz,, producers of the long-running “Charleston Christmas Special,” are bringing the sounds of the big band to the Charleston Music Hall for three shows in March. “Legendary Voices” is a tribute to the greatest singers of all time, including Tony Bennett, Frank Sinatra, Elvis Presley, Nat King Cole, Ella Fitzgerald, Barbra Streisand, and more.

The production includes Las Vegas headliner Brian Duprey, who is billed as the only Sinatra tribute artist endorsed by Nancy Sinatra herself.

As an actor in the hit show “The Rat Pack is Back,” Duprey spent 10 years perfecting his craft in Las Vegas and in more than 200 performing arts centers and casinos across the country. His lead role and creative development of the show built a 48-state tour and also secured the title of Best Tribute Show of Las Vegas in 2014.

Long-time fans may remember Johnny Fortuno, whose performance as Elvis Presley is uncanny. Having performed with Moranz Entertainment in the past, Fortuno is back for “Legendary Voices.” Having traveled the world performing as Elvis, Fortuno won the Ultimate Elvis Competition in Las Vegas in 2011.

Casey Fortuno also will return to this Moranz Entertainment production, bringing her powerful vocals. She recently had a No. 3 pop hit in Brazil called “Wake Up and Love Me” that was the theme song for the No. 1 telenova in the country.

The show will be performed at the following times:

For more information on the show, visit www.bradandjennifermoranz.com.

Follow us
Related Topics:brad and jennifer moranzcharleston music hall
Up Next

Charleston’s Tillman Honor Run to be held on April 21st